Photos and words by Laura Komadina.

This series is about a small community of brightly coloured houses found in Grimsby, Ontario. This community has been around since the mid 19th century, and the area was originally used as a meeting place for a group of Methodists. Once the area got more populated, instead of the original tents the visitors used, they started to build cottages. The first ever cottage was built in 1875. Between the end of the 19th century leading until the middle of the 20th century, the cottages went through a series of events which turned the area into a mini amusement park and resort area at different times.

The majority of the cottages were destroyed throughout the second half of the 20th century, due to fires as well as the extension of the QEW. Around the 1940s people started to put up the remaining cottages up for sale, which now only around 10-15 of these cottages remain as permeant homes. For more details of the history, visit this website.

My series captures these unique homes with a straight ahead architectural photography approach, framing each of the homes in a very similar way.

The actual prints of these photos will be up at Ryerson University’s Tumult: Arts Festival on Gould St from 4-11pm until September 8th. 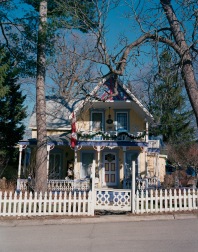 Laura Komadina is a Toronto based photographer. Most of her work is nature based because she gets along better with trees then people. As well, majority of her personal work is done on 35mm and 120mm film. She is currently studying Photography at Ryerson University. You can find her work regularly on instagram @komadinator . Check out some of her series on her website too- laurakomadina.com.